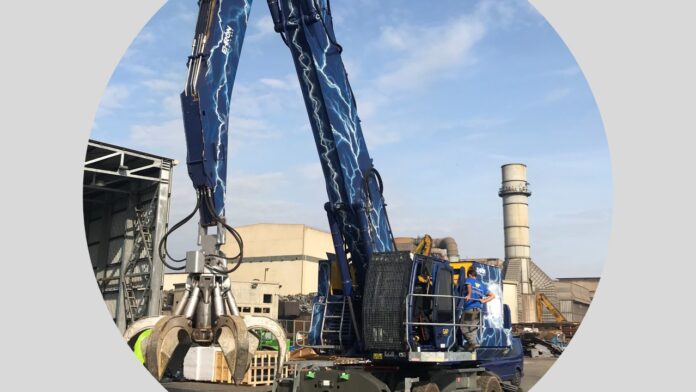 The protagonists of a successful collaboration in the world of industrial machines are Moog and Dolomitech companies. The broad segment that includes excavation, material handling and transport machines is increasingly protagonist of electrically powered vehicles that join conventional ones. Concerning this, emblematic is the electric industrial loader implemented also thanks to Moog, top player in the supply of high-performance solutions for industrial automation. It is a “full electric” machine with characteristics that allow its use in industrial areas and buildings.
The project was managed by Dolomitech, engineering company headquartered in Trento, and it is characterized by several complexities as it is a “monster” loading machine in the category of industrial electric vehicles.
The machine weighs 50 t, it can lift 3 t and is equipped with an arm that reaches 18 m extension. Its mission is the short-range handling in iron and steel areas and plants, with performances that concern the mechanical, motion and electric aspect. Precisely due to this reason, Moog engineers have designed a state-of-art system, with each loader equipped with 3 EPU, Electro-hydrostatic Motor-Pump Unit, 4 servomotors and 7 customized DR2020 servo-drives.
The successful Dolomitech case proves that Moog technology enables the existence of battery-powered machines, anyway with the same performances as conventional diesel systems.

Volkswagen, the electric model that will replace Passat

The shift to electric of traditionally estate cars is a very strong signal of the neat direction the market is undertaking.
In the lapse of three years, in fact, Volkswagen ID.6 is likely to replace Volkswagen Passat.
The new Volkswagen ID.6, which will be 100% Made in Germany because produced in Emden factory, will have two bodywork variants: a sedan and a station wagon estate car. The new electric model will be equipped with 84 kWh-capacity battery that will provide around 700 km autonomy. One of the two variants will be provided with rear electric motor and the other with double motor to offer all-wheel drive. What about the recharge speed? ID.6 supports fast recharges up to 200 kW, permitting to obtain about 230 km of autonomy in just 10 minutes from a fast DC column.
Volkswagen Passat will be probably replaced by about 36 months, precisely when the official presentation of Volkswagen ID.6 is scheduled. 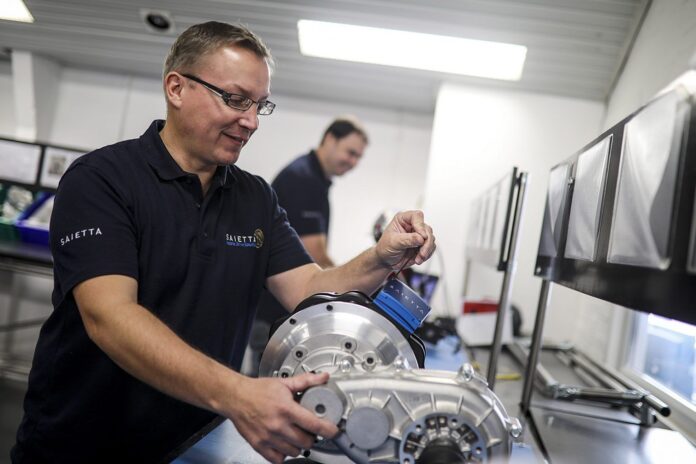 English manufacturer Brandauer secured £500,000 funding boost for clean transport project.
The company has been selected to be part of a new consortium led by tech company Saietta, which has won an Advanced Propulsion Centre (APC) grant to fast-track production on new electric propulsion motors for use in all vehicles from scooters through to buses.
The unique Axial Flux Traction technology delivers class-leading performance at the price points required for mass market adoption and marks a step-change in how the sector can make electric vehicles go faster for longer.
Production specialists at the Birmingham-based firm will use their thin gauge stamping and progression toolmaking expertise to produce busbars and laminations for use in the state-of-the-art motors.
The APC research contract will enable Saietta to ramp up production capacity to 150,000 motors per annum and trigger the hiring of 150-250 highly skilled engineers in the first round of recruitment.
Saietta will work closely with Brandauer and The AEV Group, a specialist in the manufacture of electrical insulating resins, varnishes and compounds, on refining the process for core motor component manufacturing and motor assembly, thereby delivering a cost effective, highly automated production assembly process. 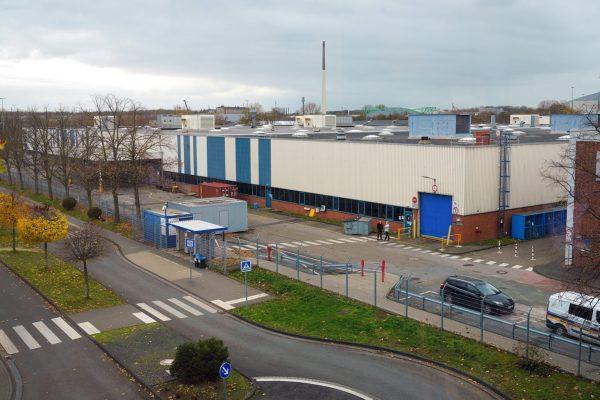 Global Japanese automotive supplier Marelli will open a production facility for electric drivetrains in Cologne, Germany and the start of production is targeted for the first half of 2021.
A step back: through combined expertise in both electric drives and thermal energy management systems, Marelli offers a unique technology portfolio enabling the design of highly efficient electric vehicle platforms.
In the new German facility, will employ around 160 people and the production line for electric drivetrains will be installed on 18,000 sqm, while there is space for a potential future expansion.
«With the new production facility – said Joachim Fetzer, CEO of Marelli’s Electric Powertrain business – we are expanding our manufacturing footprint and capacities for this important growth market. We have chosen Cologne for its location in the heart of Europe, as we find highly skilled employees with experience in the auto industry here and as the region is developing into a center for e-mobility». 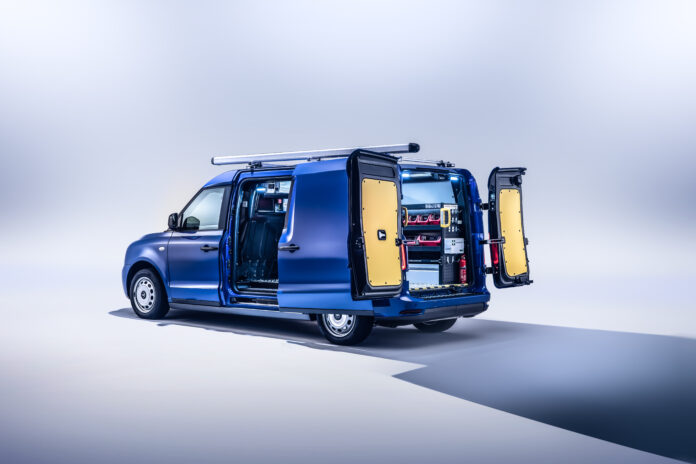 LEVC – London Electric Vehicle Company – has announced its first official conversion partner for its new VN5 electric van. It’s Modul-System, the largest global vehicle racking manufacturers that will support LEVC across multiple key European markets.
Modul-System has been operating for over 40 years and offers high quality, custom and lightweight vehicle racking solutions specifically designed to meet the demanding and ever-changing needs of the commercial vehicle market.
The company has already provided conversions for LEVC’s VN5 prototype ‘trial fleet’ of converted TXs that are being used by a wide range of businesses including logistics giants DPD and Royal Mail, as well as telecoms flagship, BT Group. 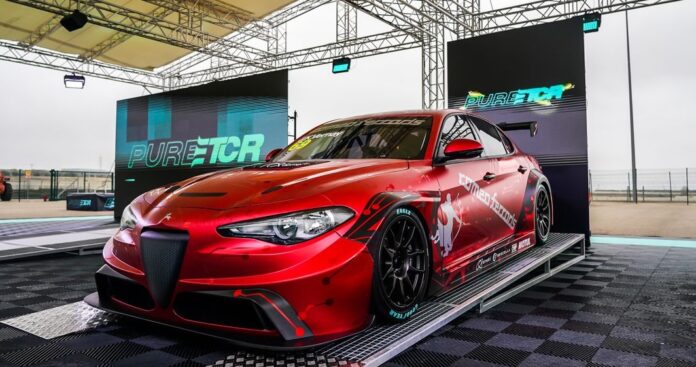 Alfa Romeo Giulia ETCR by Romeo Ferraris is the electric variant intended for the Pure ETCR championship starting next year and including cars exclusively powered by electric motor.
The presentation took place recently at Aragon, fascinated by the splendid red called Romeo Ferraris Red to mark a border with the iconic Alfa Red.
Aerodynamics is perfectly cared and Pure ETCR electric motors adopt an accumulator with control modules implemented by Williams Advanced Engineering with propulsion system manufactured by Magelec Propulsion.
The propulsion package adopts four M21Sx-x-19 MGU motors with fluid cooling and 500 kW peak power, i.e. 680 HP able to introduce 960 Nm torque.
Motors are perfectly modular and can be positioned on the rear axle, coupling two on each wheel with transversal arrangement.
The transmission is two-stage with single speed of Omni Gear F06V1-Z-19HXYY type. Giulia ETCR (like the others of the series) adopts the rear-wheel drive while the canonical 0-100 km/h is travelled in just 3.2 seconds with 270 km/h. maximum speed.
The higher weight burden is caused by the battery that weighs 450 kilograms and is positioned between the two axles.

Comau, top player that develops advanced products and systems for the industrial automation sector and Tecnomatic, Italian automation supplier specialized in forefront stators with hairpin technology, have joined forces to offer state-of-the-art technologies intended for assembling electric motor and transmission.
Due to this long-term partnership, Comau integrates its offer, so covering the whole manufacturing cycle, from prototype design and validation to production systems and after sales service.
Matching their respective highlights, the two companies assure a double advantage to customers: on one hand, the presence of a single provider of perfectly integrated solutions for the assembling of electric motor and transmission, on the other hand the access to an engineering approach developed to face present and future manufacturing requirements.
The systems jointly developed by the two partners are modular, scalable, economically accessible and digitized.
Comau’s witness is enthusiastic: «This collaboration – explained Ennio Chiatante, Global Business Development – Electrification – is part of a long-term strategic vision and highlights our will of promoting innovation in the electrification field. It is fruit of shared targets and complementary competences».
Tecnomatic’s witness is as positive: «This agreement will be advantageous for all, not only because it joins our respective technical knowledge but also because it allows meeting our customers’ requirements at best, of both acquired and potential clients. With over twenty-year expertise in the field of stators with hairpin technology, Tecnomatic believes its activity is fully in tune with Comau’s competences and global ranking. Together, we will be able to support both OEM and Tier1 suppliers of the automotive industry and of many others, too» – stated Paolo Datore, Business Development Manager.

The new hybrid plug-in by Ferrari 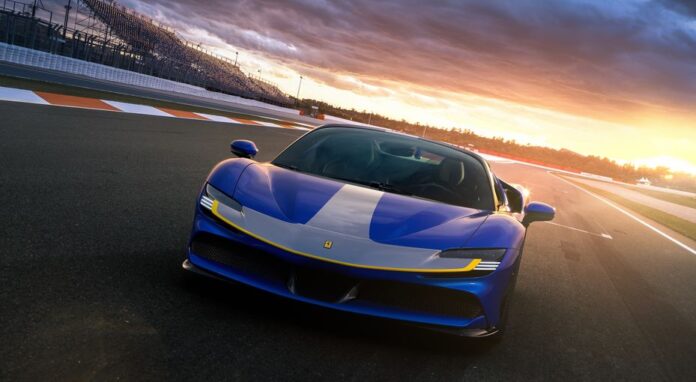 Extraordinarily fine. SF90 Spider, convertible version of the SF90 Road, it is not only the first Ferrari series plug-in hybrid spider, but it also represents the absolute reference in terms of drive performance, innovations and emotions compared to the range by Maranello Company and the production of the whole sports car sector.

It is a disruptive car, for those aspiring to the highest level of Ferrari technology and wishing to be excited by its performances without giving up versatility and the drive pleasure with open top assured by RHT (Retractable Hard Top), factory trademark of the spiders by Prancing Horse since 2011.

The hybrid plug-in system of SF90 Spider assures it top performances: the 780 HP turbo motor is in fact joined by three electric motors, one at the rear and two on the front axle, which raise the maximum available power to as many as 1000 HP.
However, the great refinement of this plant does not imply complications for the pilot because the sophisticated control logic autonomously supervises the energy flow management according to use conditions.

Therefore, the driver’s only task is setting up one of the use modalities of the power unit (eDrive, Hybrid, Performance and Qualify) that can be selected by the brand-new eManettino and let emotions free.

Like the SF90 Road, also the SF90 Spider is equipped with four-wheel drive on-demand, an absolute première for the sports cars by Maranello Company that allows the car to turn into the new benchmark for the standing start: 0-100 km/h in 2.5 s and 0-200 km/h in 7.0 s.

The adopted architecture has allowed engineers to enhance also the management logic of the dynamic car control, now called eSSC: the system constantly assesses the dynamic vehicle conditions and checks its driving stability and front electric motors, in order to manage independently the torque applied to the inner and outer wheel (Torque Vectoring), significantly improving traction out of corners and allowing the pilot to reach the limit in full simplicity and safety.

The electric sports car that stems from wastes

Implemented in about 18 months by 22 Dutch students of the Tu/ecomotive team University of Technology, Luca is a prototype of two-seater sports electric car, which boasts a green soul indeed.

The vehicle is equipped with two electric motors, one for each rear wheel, and its weight is just 360 kilograms, with the addition of 60 kg of batteries.

The great peculiarity? Luca has been fully made with wastes, including the plastic fished out of the ocean, recycled Pet bottles for the frame and unsorted household wastes for interiors, which include also two very comfortable customized seats, whose cushions are made with a combination of coir and horsehair.

For the bodywork, they have used recycled Abs, a hard plastic drawn from landfill materials such as TV sets, toys and kitchen appliances.

The two-seater with sports look has a yellow livery made with the application of a film, then easily removed to be recycled again.

Considering wastes as precious material in a car with sports look is then the outstanding frontier exceeded by the team of the project manager Lisa van Etten. «We hope– stated Matthijs van Wijk, member of Tu/ecomotive team – that automotive companies will start using waste materials, already feasible for many applications. We wanted to demonstrate it is also possible to make a frame with them».

Plant ready for BMW i4 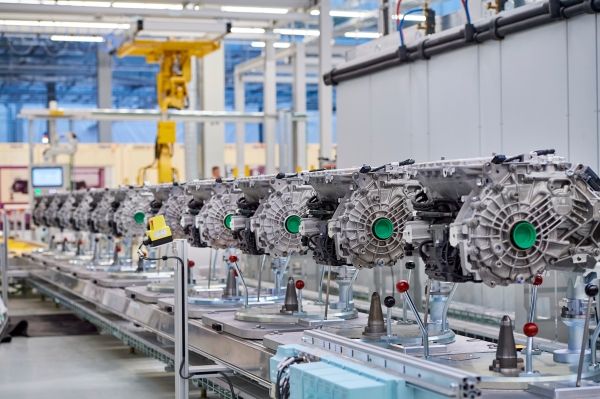 After six weeks of activity, the works in Munich plant, where they will manufacture the BMW i4 electric car, have been accomplished. It was necessary to intervene on the assembling system because the manufacturing concept of the new model is different from conventional architectures. The assembling is fully automated and uses camera systems to control automatically if the 550-Kg battery pack is correctly positioned on the line.

Moreover, the production plant is equipped with a new aerial electric conveyor, together with conveyors in the vehicle arrival zone.

The new sedan will have an electric motor featuring 530 HP of power, will adopt the fifth-generation eDrive technology and will reach the same performance level as a V8 combustion engine.

The motor power supply is entrusted to an 80 kWh battery, with modern cell technology, which guarantees 600 km of autonomy.

The recharge is supported up to 150 kW and in 6 minutes it is possible to recharge the sufficient energy to travel for about 100 kilometres, whereas in about 35 minutes you refill 80% of energy.