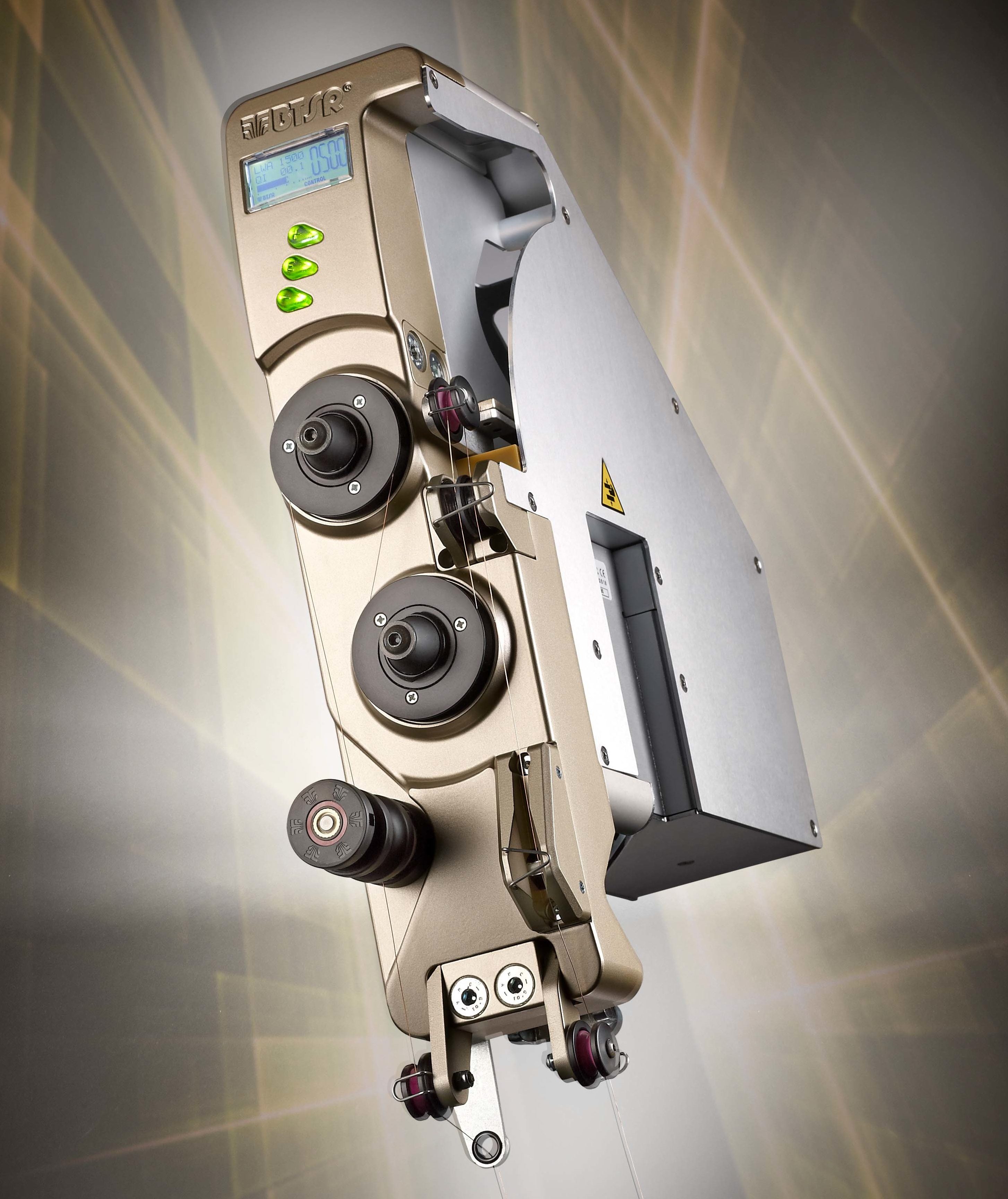 Based on the new concept of “dual drive system”, the device designed and implemented by BTSR International can grant the perfect combination between the feeding control and the accumulation control. A multi-patented system that, actually, is qualified as the first “positive and driven” feeder introduced on the market.

About 120 employees, more than 25 million Euros of turnover expected for 2018, with over 70% represented by an export addressed worldwide. We are speaking of BTSR International, company specialized in the design and in the implementation of electronic sensors for the quality control in the productive chains of textile-clothes, of mechano-textile and technical textile, for years operating also with solutions for the check of metal wires (copper and precious metals). Ambit, the latter, that has allowed it to further enhance its presence in the automotive market. Solutions with high technological content, which include electronic sensors and smart systems, aimed at satisfying the most diversified requirements concerning the monitoring of the yarn running, the feed tension keeping and the primary quality control parameters on any type of yarn: traditional yarns, elastomers, glass fibers and carbon fibers. A broad range of devices among which stands out CWF 2000, specific high-tech system for the control of the metal wire tension.

A highly technological multi-patented system that, thanks to a fully new wire tension control modality, differing from the already known and more conventional ones, allows reaching unprecedented process efficiency and quality.

«CWF 2000 – underlines Caviggioli – allows feeding the wire constantly and uniformly, irrespective of the speed of the wire itself, connected with the machine speed and the coil size, as well as with the coil section/shape».

Double closed loop for total quality: from the coil to the winding

Based on the new concept of “dual drive system”, able to grant the perfect matching between the feeding control and the accumulation control, the new CWF 2000 represents the first “positive and driven” feeder released on the market.

«Very compact and ergonomic – specifies Caviggioli – this device can be integrated also on existing lines and can process wires from 0.014 to 0.6 mm of diameter. Thanks to its intrinsic peculiarities, it allows programming up to three different tension values of wire feeding, without any interface/connection to the coil winding machine, or up to four different wire feeding tension values during the winding cycle, using two digital outputs of the coil winding machine».

More in detail, the programmable tension range is included between 5 and 2,000 g, with 1 g resolution that drops to 0.01 in the 0.5 ÷ 200 g range. The feeding speed range is instead 0.1 ÷ 25 m/s, that is to say 6 ÷ 1,500 m/min.
Technological core of the system, which enables such performances and assures excellent results in terms of quality and repeatability in the winding process, is represented by the two particular (and patented) controls: Motor Torque and Lwa (Length of Wire Absorbed).

«In short – highlights Caviggioli – there is a double closed loop that controls the feeding tension of the wire and its advancement speed, along the entire path, from feeding coils to final coils. The Motor Torque function assures the perfect control of the motor torque and then the constancy of the input tension, annulling eventual tension peaks».

The digital motor torque control can detect and adjust an eventual tension anomaly of the input feeding, generating an alert and the process stop before the wire can be damaged. Thus avoiding any production not in compliance with the demanded requisites. Essential is also the capability of managing automatically the sudden absorption or release of the wire during the work process and the simultaneous maintenance of the wire feeding tension at the set value.

«The second closed loop – adds Caviggioli – represented by the function called Lwa, it too patented, assures instead a constant consumption of output wire».

Such function allows detecting and controlling: any dimensional variation of the shapes of the winding coil; a wrong wire size; the wrong setup of clamping chucks (core sliding); eventual accumulation of filth inside the wire guide; damaging of the wire guide; any mechanical variation or friction on contact points after the feeder (between CWF and coil). Moreover, it allows monitoring the gradual deterioration of the mechanical machine parts (wire guide, chucks and so on), registering eventual temperature differences between hot/cold machine, as well as the passage of the wire through the wire guides with different angles and frictions.

Control, monitoring and planning of the production 4.0

In addition to the two motors that control and keep the winding feeding tension constant during the entire process, CWF 2000 relies on a third motor, too. The latter adjusts a tensioning arm that, automatically, can suit the already mentioned broad range of metal wires to be processed (from 0.016 to 0.6 mm of diameter). High flexibility assured by a set of small accessories that make it a component able to satisfy and to suit the most different requirements.
The base version, CWF 2000 is suitable for loads from 5 to 800 g but it can be easily upgraded to endure max. loads of 2,000 g, adding a tension stabilizer of the input wire. The execution called CWF 2000/L (provided with load cell from 0.5 to 200 g, resolution of 0.1 g) is in fact suitable for processing very thin wires and low loads. The CWF 2000/Slk execution features the same peculiarities as the previous model but it is equipped with special input tensioning arm, apt for the processing of spiral wires.

The company in brief

The company in brief Established in 1979 thanks to the entrepreneurial farsightedness of a very young electronic engineer, Tiziano Barea, class 1960, president in charge and general manager, Btsr International (acronym of Best Technologies Study and Research) is headquartered in Olgiate Olona (VA). A plant extending on 6,000 covered square metres that host the research and development centre, administration and accounting offices and the production centre where high-tech and human resources synergistically operate at the service of the process and product innovation.
«Our production cycle – states Tiziano Barea – can be subdivided into two main sequential phases. The first is highly technological and extremely robotized. It provides for the use of a minimal highly skilled labour force and the use of fully automated lines for the mass-production of electronic components, constituting the core of our products. The second manual phase provides for the division into organized work teams. They carry out the testing, the assembly, the calibration and the serial identification of all components, for a precise and total traceability of finished parts». Constantly pursuing the process innovation, the production division avails itself of advanced plants and instruments really conforming to 4.0, among the most cutting-edge available on the market. Lines able to manufacture 400,000 components/hour, to carry out 3D analyses of the electronic board welds and X-ray machines to test the finished product fully automatically. High added-value systems that allow a 100% controlled just-in-time production, able to satisfy the most different market requirements.
«A prevailingly international market – adds Barea – with a presence of our brand in over 30 Countries, which we address with a strong “problem solving” attitude, since the design phase. With an operational structure subdivided into four business units: textile, technical-textile, electronic components and on-demand projects, upon precise specifications». Know-how, competences and intellectual property that, at the threshold of the first thirty years of activity, means over 500 international registered patents.
«Our growth – ends Barea – has always been based on intense, unceasing and constant research and development activities, for which about 7-10% of our turnover is allocated every year». Never-ending innovation, then, from which derives also CWF 2000, the new high-tech system in the technology of metal wire feeding tension Btsr-branded.

«With a really minimal expense – confirms Caviggioli – you can replace the accessories to reconfigure the system quickly according to specific requirements, without any additional and/or replacement intervention».

The innovative system proposed by BTSR International stands out also for maintenance and safety aspects. Not being a brake, in fact, it does not need particular maintenance activities, apart from the simple substitution of the o-Rings.

«Concerning safety – further underlines Caviggioli – without needing a direct contact with the wire, the operator can check on the display the work tension, the speed and the various process phases. Data that obviously can be displayed also from remote».

Keeping pace with Industry 4.0, the new CWF 2000 is in fact based on a control software that can be also integrated also into the PLC of the coil winding machine on which it is installed, with all consequent operational benefits.

«In this way – adds Caviggioli – the data browsing and analysis, the process monitoring and programming become immediate. Activities that can be carried out from remote by the new Matrix Touch Coil, a functional dedicated tablet. Opportunity that allows identifying easily also the critical points of each winding line, transforming the device also into a powerful support for the operators and the managers of production and planning. Each single line can then be visualized by the App Easy Coil, for departmental operational reporting».

The various production lines (which can be spread also in different plants) are instead supervised by the Pc Link Web Coil, a web-based app that allows collecting uniform data to monitor the entire production. This grants a homogeneous data collection according to Industry 4.0 requisites, not only in case of installation on new lines but also of less evolved winding plants.

«Control, monitoring and planning of the production – underlines Caviggioli – that can be performed with Pc Lin Web Coil for any device developed by us, in addition to CWF 2000, and installed on any other line typology».

It is a highly innovative solution that aims at redefining the state-of-the-art in the wire feeding technology, expected to exert a significant impact in the metal wire winding sector.

«Not only in terms of versatility – states and reconfirms Caviggioli – but also in terms of production efficiency, quality and repeatability. The device allows the processing of a broad range of wire diameters, centralized programming and monitoring, great versatility to keep a tension value constant and granted».

At the same time, CWF 2000 represents a highly profitable investment. As witnessed by the numerous applicative ambits that have benefitted from it for a long time.

«They are manufacturers of ignition coils for automotive – ends
Caviggioli – of transformers with primary and secondary windings, contactors, relays and also producers of stator windings for household appliance motors, just to make some examples. Applications carried out on new plants and retrofits of existing lines, which have brought higher production efficiency, cost saving and quality increase. Benefits that, together with the drastic reduction of wire breakages and rejects, have allowed an investment payback in few months».