Stepper motors play an important role in the manufacturing industry world. Their use prevailigly depends on expectations and applications. If we aim at high precisions, mechanical and electric sturdiness, user friendliness, control and maintenance of the rotor’s position also without power supply, then this motor typology is ideal.
In the present article, we are treating the main typologies of available stepper motors on the market, the essential structural aspects and their operation characteristics in static and dynamic conditions.

The stepper motor is used in small-power drives because it is less efficient than other motors. It allows achieving high positioning precisions and it is suitable for the sectors of robotics, automotive, 2D plotters, 3D printers and several other ambits.
Their name derives from the fact that a well precise angular rotation, precisely called step, is set at each control. They are piloted by opportune electronic switching circuits with open-loop position control. In absence of a specific control, the stepper motor maintains the position reached. In general, we can state that all stepper motors are composed by a stator, where are present the windings made up by copper wire coils, and by a rotor.

In the ambit of the manufacturing industry, stepper motors are classified as follows:

The rotor consists of a permanent magnet and shows, on its surface, the same number of poles as those present on the stator, where two phases (or windings) are present.
If we indicate with D the number of pole pairs and with α the pole angle, i.e. the angle taken up by a pair of NS (north-south) poles, we can express the following relation:

This type of motor can be excited in three ways:

In Figure 1, we can see a schematization of the permanent magnet stepper motor.

The operation principle of the variable reluctance stepper motor (Figure 2) can be ascribed to the tendency of mobile parts to be arranged in minimum reluctance conditions. This operation corresponds to attaining inductance and maximum flux. Reluctance, precisely, measures the opposition of a material to the transit of the magnetic flux. The VR motor has a grooved-iron rotor and a stator constituted by a stack of laminations with toothed poles. The rotor has a different number of teeth, or pole expansions, from stator’s. The latter features ns teeth, while the rotor body nr=ns±2. The angle among teeth (ϑr/s) is:

Where s and r stand, respectively, for stator and rotor.
Considering the stator, on each pair of opposite teeth is present a winding that constitutes a phase. The number of phases (F) is given by:

The minimum number of phases is three (A, B and C). It is not possible to make this motor typology run with two phases only, since the rotation sense would not be determined. 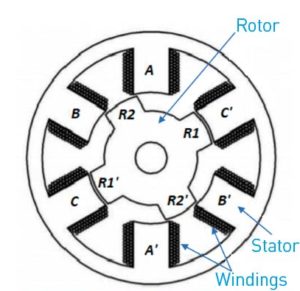 The vast majority of stepper motors is hybrid (HY). They group the characteristics of PM and VR motors.
As shown in Figure 3, the rotor is composed by two parts, called cups, magnetized in axial sense (one North and one South), holding a series of teeth alternated to slots. Cups are fitted out of phase, so that the teeth of one correspond to the voids of the other. Indicating with α the angle among the rotor teeth, the phase displacement between the cups is α/2. The stator is similar to the one of VR, with a lamination stack with toothed poles but with just two phases. When the A-phase is excited, the S polarized teeth of the front cup are aligned with the teeth of the N-pole. In the rear cup, with teeth out-of-phase by α/2, the contrary occurs: the N polarized teeth of the rotor are aligned with the teeth of the S-pole of the A-phase. The misalignment between rotor teeth and B-phase ones is worth α/4. When the B-phase is excited, the rotor must rotate by α/4 to be correctly aligned with the poles of the B-phase.

Under static conditions, a stepper motor of whatever kind can develop the following torque:

Operating the motor with some piloting circuits, it is possible to assess the operation of stepper motors in dynamic conditions. In technical literature, we can distinguish two operation typologies (Figure 5):

Stepper motors play an important role in the manufacturing industry world. Their use prevailingly depends on expectations and applications. If we aim at high precisions, mechanical and electric sturdiness, user friendliness, control and maintenance of the rotor’s position also without power supply, then this motor typology is ideal. However, we should take some limits into account, like the impossibility of having high speeds, the heat production and, especially, the need of providing for suitable piloting systems.