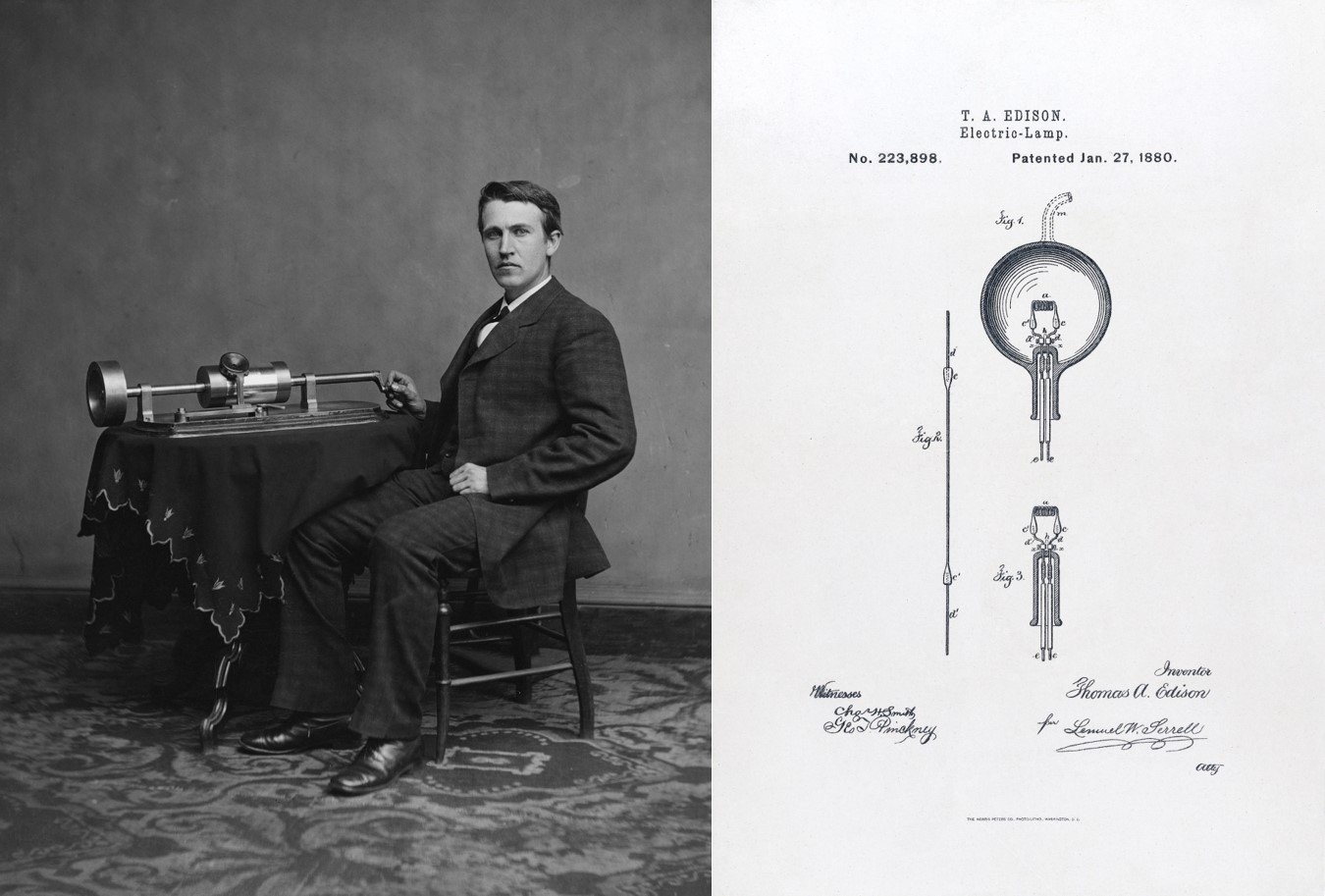 The stronger and stronger orientation towards the direct current is one of the most debated topical issues, especially in the renewable energy world. Is a paradigm change really in course, recalling the original intuition by Thomas Edison?

Nowadays, topicality spotlights on energy provisioning are cast on the direct current and on the relative role in the ambit of renewable energies. This was precisely the theme of an event of cultural interest organized by Lapp.
“Ancient”, but very current matter, the direct current technique is conquering new supporters because the production, distribution and use modalities of electric current have deeply changed. This modiﬁcation will lead to radical transformations at all levels of the industrial activity, connection technique included.

It is never out of place to review history a bit and in this case we must go back to over 140 years ago to return at the issue’s origins. At the end of 1882, the genius Thomas Edison, one of the greatest inventors in all times due to the authorship of as many as 1093 patents, inaugurated his ﬁrst power plant that –moreover – electriﬁed Wall Street in New York, and operated in direct current.
One of Edison’s collaborators at that age – nothing less than – Nikola Tesla, was entrusted with the development of a dynamo, but he had a brilliant idea: instead of working at the direct current, he focused on the alternate current technique.

Therefore, after “the separation” from Edison, Tesla carried out his project in collaboration with the “the competitor”, George Westinghouse and Edison did not absolutely change his mind. He did not want to recognize the advantages of the alternate current at all, like the simple current change through transformers for the transport on long distances and subtler cheaper cables. Well, the lighting of the world exhibition in Chicago in 1893 was generated by alternate current, constituting the ﬁrst notable litmus test of the growing popularity of such technique. Only afterwards Edison admitted – but not publicly – that giving up alternate current was a mistake.
However, nowadays do we still think it was an error indeed?

Edison’s concept and his “stubbornness” about the direct current is today redeeming itself through various present developments.

«An ambit in which the direct current is returning and arousing interest – explained Georg Stawowy, Member of the Board and CTO LAPP Holding AG – is the production of energy until now occurred in alternate current, for instance in generators of large nuclear or coal power plants or in hydraulic turbines. With this technique, the energy distribution is performed by transformers and a current reduction inside cables takes place, resulting in minor dispersion.

However, in the current scenario, more and more production systems that generate their energy under the form of direct current are entering the network. An example are photovoltaic plants, supported also by chemical batteries or accumulators that do not like the conversion from direct current into alternate current because it implies some losses». Therefore, in the light of the growing (and necessary) use of renewable energy production plants, today and in this context the best choice would be constituted by a direct current network. Efficiency, in fact, is undoubtedly the most convincing issue in favour of the shift to direct current. «If thermoelectric, nuclear and coal plants input alternate current into the network, and vacuum cleaners and lamps use it directly, the eﬃciency degree, at utility level, reaches about 65 %. This means that around one third of the electric energy is lost and today, more than ever, the situation is worsening owing to photovoltaic plants and solar energy power plants, besides the growing installation of battery accumulators that increase the current to be converted into alternate».
The same is true on utility side: as proven by the overheating of power supplies. The scenario shows the approximate 56% reduction of the overall energy network eﬃciency; a situation that needs a system reorganization.

Moreover, the CTO of LAPP mentioned us an alternative consisting in the use of the direct current technique for the transport on very long distances through transmission of high voltage direct current (HVDC), as well as of low voltage direct current networks in dwellings and in industry, to be connected to portable computers and industrial motors, for instance, without either feeders or inverters. With this solution and the mix made up by a photovoltaic plant on the roof and an electric car in the garage, an electric network set in direct current would allow reaching a very high overall efﬁciency: about 90 %.

Another reﬂection on this theme concerns the energy distribution; history shows us the electric network has been dominated for a long time by big power plants that distributed their energy to close regions according to a star conﬁguration. The growing success of renewable energies has led to an increasingly decentralized and localized electric network, often with on-site exchange. «In these applications –Georg Stawowy explained in detail – the alternate current technique cannot provide its advantages. Nevertheless, the alternate current is not ideal on big distances, too, because the losses depending on transmission signiﬁcantly increase. A HVDC connection, although twice more expensive in implementation phase, is advantageous in virtue of minor energy losses starting from a length of about 400 kilometres, while in case of submarine cables used for instance by oﬀshore wind farms, it already oﬀers advantages starting from 60-kilometre distances. Moreover, HVDC connections are extremely  reliable. Due especially to the progresses made in the energy conversion through power electronics, direct currents can be converted up to 800,000 Volts, without using transformers».

The new energy use

In dwellings and in industrial factories, the current distribution occurs through low-voltage networks, then through Schuko sockets, or standard sockets for alternate current. The number of electric appliances that need direct current is steeply rising, including computers, LED lamps and also electric cars, dynamic market that makes us conﬁdent in the future. Besides, in the case of motors used in industry, the regulation of the revolution numbers is increasingly performed by frequency converters with intermediate circuit in direct current. «All conversion circuits from AC into DC of these converters would become superﬂuous if we chose direct current networks with centralized conversion into DC of the voltage. In the automotive industry, they are experimenting some pilot projects that provide for the exclusive power supply of entire manufacturing units with direct current and the use of batteries for energy accumulation in the short term».

«Instead of using a rectiﬁer for each converter, we might power motors directly with direct current. Concerning this, ideal would be a direct current 380 V network, because intermediate circuit voltages are generally included between 350 and 400 Volts.

The possibility of choosing between direct current or alternate current operation would be easily implementable, too» here is the vision by Gaetano Grasso, who illustrated us the advantages of the direct current network in this context.

They consist in low losses caused by conversion, higher energy networks’ stability due to harmonics reduction, component saving and minor overall dimensions, more integration simplicity of decentralized renewable energy sources like photovoltaic and energy recovery, for instance use of brake energy and accumulation in batteries.

In the development of cables for direct current applications, LAPP plays a pioneering role, among the suppliers of products for the connection technology, which distributes electric cables, cable glands, connectors and accessories for a broad range of industrial applications, in Industry 4.0 ambit, too.
«In collaboration with one of the most important technical universities – explained Gaetano Grasso, Product Management & Marketing Manager of LAPP Italia – we noticed that in the ambit of some tests, in a direct voltage ﬁeld insulating materials show a diﬀerent ageing behaviour
compared to that shown in an alternate voltage ﬁeld. Currently, we already oﬀer a complete range for ﬁxed and ﬂexible applications in the direct current ﬁeld and for industrial partners we have developed a hybrid cable that brings together all the functions for a motor control in a single insulating sheath».

In the last 2 years, complex applications have been implemented in various Countries and they have started pilot projects aimed at conﬁrming the use of the direct current technique in the future. In the regions with ineﬃcient net infrastructure, like India for instance, in the villages they are implementing a decentralized energy provisioning system based on direct current. In Germany, instead, in the industrial ﬁeld, the direct
current technique holds nowadays a dominant position, especially in server ﬂeets with high energy consumption. Here, use degree variations generate positive economic eﬀects, whereas closed applications allow managing safety-related aspects with more eﬃcacy. Moreover, in German territory they have started a joint project framed in a state programme of research promotion. Fifteen partners from various industrial sectors participate in the project, like LAPP, Daimler, Siemens and Bosch Rexroth, with various research institutes, thanks to which are stemming the ﬁrst manufacturing plants with machines that will be equipped with a sturdy secure DC network. «Today, therefore –the manager of LAPP, Georg Stawowy, aﬃrmed – we can then state the direct current has its reason for being in practice and is intended for gaining growing importance in the industrial application in Italy, like in all other industrialized Countries. Moreover, they are currently studying the ageing mechanisms of plastic materials permanently exposed to the direct current inﬂuence and intended for applications in both exercise systems like switches and electric boards and in lines. LAPP is currently very active in the ambit of a project that studies the long-term stability of insulating materials for cables and lines».
by Lara Morandotti