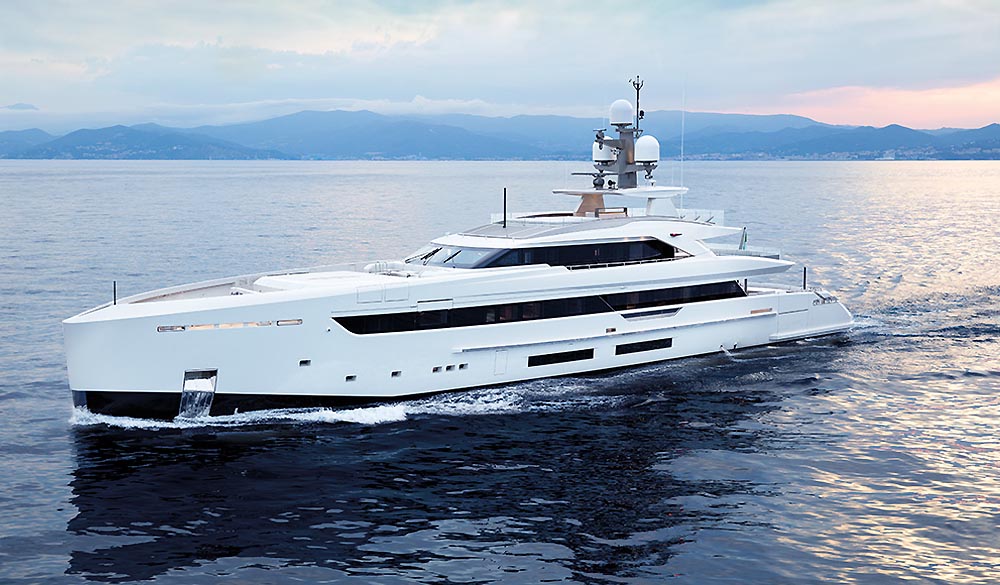 The first mega-yacht with hybrid propulsion Bintador is in Tankoa Genovese yard, shipyard specialized in the construction of fully customizable metal mega yachts.
Number one in the S501 range featuring 50 metres of the yard, the boat is powered by a state-of-the-art hybrid propulsion package based on a pair of diesel 895 kW (1200 HP) MTU and two electric 300 kW motors assisted by two 250 kW variable-speed generators.
Among the various operation modalities, it is worth underlining DEM (Diesel Electric Mode) that assures a notable fuel saving and leads to decrease noise levels: the electric motors are powered by two variable-speed generators and allow reaching a speed of 10.5 nodes, with maximum autonomy of 4900 nautical miles. In hybrid modality, instead, the two diesel generators are off during the navigation and one of the two main motors works to power the second electric motor that shares in the propulsion and to satisfy the energy requirements for non-board services. At 12 nodes, the yacht will have a cruise autonomy of about 4000 nautical miles.
The choice of navigating in Full-Speed modality sets in operation both main motors and the generators to power the two electric motors and on-board services: in this case, the yacht reaches a maximum speed of over 18 nodes.
The yacht has been already awarded: it won the Boat International 2020 World Superyacht Award as it is the best “Displacement Motor Yachts Below 499GT – 40M and above”.
Are you wondering how much does it cost? About 31 million Euros!