Home Applications Audi, its flagship is electrified, too 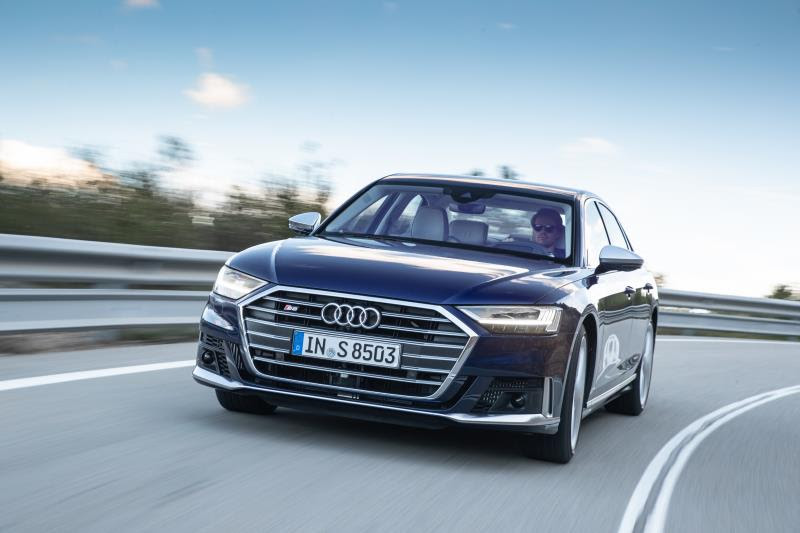 Audi A8, flagship of the Brand, is a real technological manifesto and it is available in the mild-hybrid 48-Volt version, too. It is the first model by the four-ring company equipped with the fully-digital control management MMI touch response concept and with predictive active suspensions.
Audi A8 and Audi A8 L 3.0 (60) TFSI tiptronic have a V6 3.0 TFSI turbo engine, with direct petrol injection with anti-particulate filter, which supplies 340 HP. For the electric traction, a permanent magnet synchronous (PMSM) 136-HP integrated motor is at stake, together with the separation clutch, in the eight-speed tiptronic transmission with torque converter.
With these models, for the first time Audi dedicates the zero-emission propulsion to the high-end segment.
Audi S8 has instead a V8 4.0 TFSI 571-HP motor, with 800 Nm of torque, mild-hybrid 48-Volt technologies and cylinder on demand. Its performances equal a supercar’s, with active predictive suspensions, four-wheel traction with sports differential and dynamic all-wheel steering as standard.
As base setup, Audi A8 TFSI starts in electric modality (EV) and travels at zero emissions until when the driver presses the accelerator pedal with decision.
The driver can freely decide if and how intervening in the interaction between the thermal engine and the electric motor. Concerning this, the “EV”, “Auto” and “Hold” drive programmes are available and they respectively give priority to electric traction, automatic hybrid modality, which avails itself of the predictive traction management, or to the energy saving, to full benefit of a successive travel phase. The recovery system derives from the full-electric Audi e-tron.