Obviously, we are not referring to AC-DC, the group of “Highway to Hell” and “Back in Black”. We are instead asking the question whose answer determines the first engineering choice, in other words “alternate current or direct current motor”?
It is worth noticing that this choice simply concerns the motor power supply type, even before opting for a precise technological solution. The power supply type, in fact, determines some important structural characteristics of the actuator and, consequently, influences its use type and the relative performances.
Let us try, then, to give an answer to the question: AC or DC?

Big, massive and powerful, they are the legacy of an age when the regulation, waiting for the future PWM techniques, was possible only on direct current systems.
In particular, the most performing structural typologies of DC motors provided for the possibility of regulating independently field voltage and current (i.e. of the stator winding when present as replacement of permanent magnets) and armature voltage and current (that is to say of the rotor winding).With configurations like the above-described one (called with independent regulation), it was possible to obtain specific operation curves for each type of application. 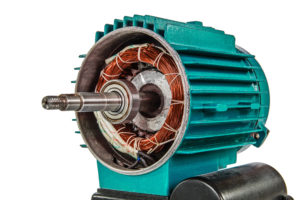 Opportunely regulating, for instance, the voltage and current magnitudes, it was possible to obtain situations in which the torque delivery was the highest in standing starts and then decreased in almost linear manner with the speed rise. These were (and still are) typically the drive requirements. However, beyond applicative situations, we are analysing what are the advantages and the disadvantages connected with the use of this type of motor.

Structurally, all DC motors have the wound rotor; it is clear that, to keep the rotation direction constant, it is necessary to supply armature current so that the magnetic field generated always interacts in the same sense with the magnetic stator field; however, since the rotor rotates on its own shaft, the magnetic interaction between rotor magnetic field (mobile rotary) and stator magnetic field (fixed) inverts the direction every 180°; a DC motor powered in this way, instead of rotating, actually would oscillate between a 0° position and 180° one. Extending the reasoning to each angle fraction, we deduce that the part of rotor winding to be powered at each fraction of angle is different from the one of the previous fraction and from the one of the successive fraction.
In DC motors, therefore, the rotor winding is actually composed by many sections and each of them is powered for a determinate fraction of the round angle.
The rotor shaft of direct current motors is then always equipped with a ring subdivided into longitudinal sectors, insulated one another, each pair of them acts as a contact terminal for a section of the armature winding.
Since the rotor turns, the rotor power supply, which is provided by sliding contacts (brushes), powers then in succession the different sections of the rotor winding, keeping the interaction between the magnetic fields constant and maximum.
Therefore, DC motors imply several circuit switchovers during their rotation; we can even state that the higher is the switchover number (i.e. the more is fractioned the rotor winding), the more the motor offers a constant torque corresponding to the highest that can be supplied. Unfortunately, each switchover requires that brushes open a circuit and immediately close the successive one and this means spark production that, as such, is source of radio-electric disturbances; such disturbances, depending of the motor power and rotation speed, can also be of notable entity and prevent or affect the operation of other contiguous electronic parts. This problematic aspect is then joined by the costs of machine downtimes determined by the necessary periodical maintenance owing to the wear of sliding contacts.

Alternate current motors do not need, in the vast majority of cases, sliding contacts because the rotor is not wound; in this type of actuators, the magnetic field of the mobile part is generated by induction directly by the one of the part fixed on a sort of “virtual” rotor winding, existing in virtue of its structural shape said “squirrel cage”.

Just for information, in the technical literature these motors are called in several ways, including “induction motors “, “asynchronous motors”, “motors with rotor in short circuit “, as well as, naturally, with explicit references to squirrels.
The absence of brushes and of consequent sparks annuls all maintenance requirements imposed by DC motors, limiting reset interventions to the mere replacement of bearings when worn out. Moreover, being structurally much simpler that DC motors, AC motors provide the not secondary benefit of low investment costs.
On the other hand, this type of motors strongly suffers standing starts, requiring even ten-time higher pickup current than the nominal one. If not managed, this phenomenon induces violent overheating that, in many cases, can be even lethal for the motor. AC motors, used in applicative situations where no frequent stops or slowdowns occur, need, then, opportune cooling extra-ventilation and/or opportune oversizing.
They are not linear elements, and this is an even more important characteristic of AC motors: the torque they provide is not linear function of any significant magnitude (voltage, current, rotation speed and so on.), featuring instead a fluctuating trend in the nominal operating range, with a single peak at a rotation speed approaching the highest permitted. This means that induction motors are affected by serious regulation troubles of the rotation speed and, apart from simple ON-OFF applications (for instance a pump or a conveyor belt), all AC induction motors today find wide use in motion applications only if controlled by opportune electronics (inverter) able to linearize their operation curve, i.e. to make the delivered torque constant.

Some years ago, somebody had the idea of combining the advantages of DC motors with those of AC motors: capability of maintaining the maximum torque in the entire speed range, unwound rotor and, therefore, absence of sliding contacts, possibility of starts and restarts without overheating damages, user-friendly speed regulation.
The new class of motors, with much pragmatism, has been called “brushless”, that is to say “without brushes”, i.e. without sliding contacts.
The technical and functional characteristics of this class of actuators are notable indeed: almost constant torque in the entire speed range, unwound rotor, possibility of constant speed variation without appreciable torque loss, possibility of frequent stops and restarts.
Since in any motor the rotation occurs due to the interaction between the stator and rotor magnetic fields, if in brushless types the rotor is not wound, it means that it must be in some ways magnetic; the rotor, in fact, is composed by powerful permanent magnets whereas in the stator (powered) it is generated a rotary magnetic field that “drags” the rotor. 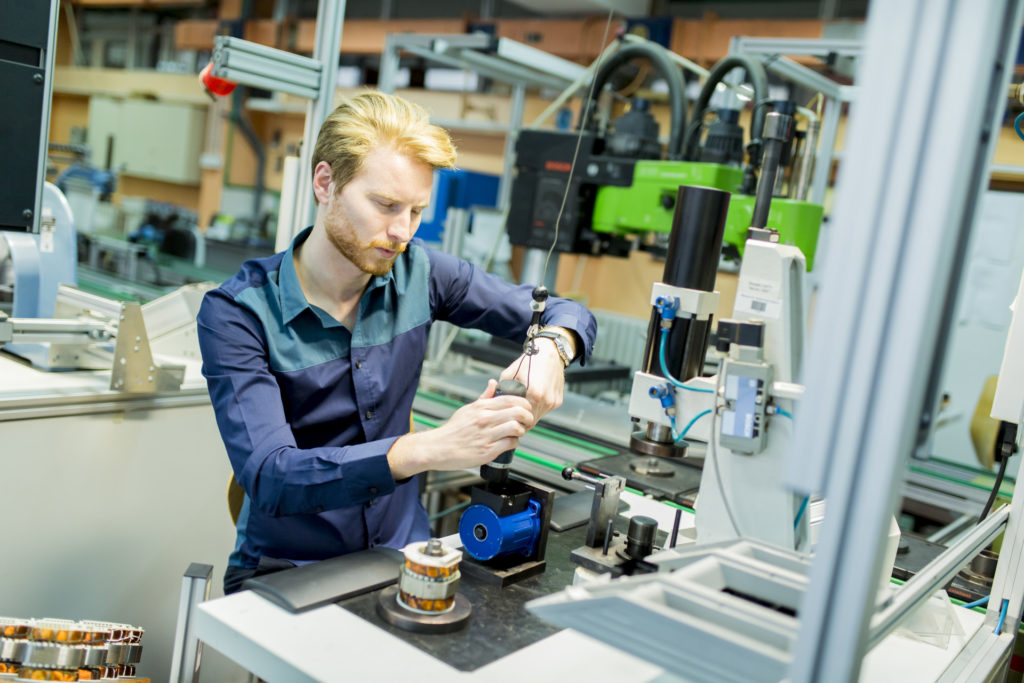 To deliver high torque, the magnetic fields must be very intense; the stator one can be made such by opportune current values whereas for the rotor one is important the quality of the permanent magnets that, to be up to the situation, are made with special materials. This explains one of the reasons for the higher cost of a brushless motor than a standard induction motor.
To achieve a uniform rotation and always the highest possible torque, inside brushless motors is always housed an angular rotor position sensor that provides a feedback to the controller on how to generate the stator magnetic field.
Such sensor can be of discrete type, i.e. able to recognize only a finite number of angular positions, or analogue, able to provide a different piece of information for each recognizable angle according to its resolution.
As for a discrete sensor nothing changes in the entire angle portion included between two distinguishable positions, this type of brushless motor is powered in DC; the motors equipped with analogue sensors are instead powered by sinusoidal alternate current where the progression of the angular position corresponds to an equivalent progression in the supply voltage.
It is evident that the higher resolution allows a better torque supply homogeneity.

The motor is an object consisting of two parts: the stator that, precisely “stays”, integral with the fixing surface, and the rotor that, exactly, “rotates” inside the stator.
It is clear for all that accelerating or slowing down an object means to win its inertia; it is then as clear for all that the inertia depends on the mass (to have a confirmation, it is sufficient to try to push first a bicycle and then a truck). Well, in motors with unwound rotor the rotor mass is limited and then with low inertia. All that results in a noteworthy energy saving because all the energy supplied is used to produce torque and not to win mechanical inertias, as it happens instead in DC motors. Not only: low inertia means also high dynamics, i.e. performance in quick speed changes and this, in modern industrial machines, is irremissible.
First in the energy-efficiency ranking are then AC motors with unwound rotor, that is to say asynchronous and brushless. However, if the energy density is at stake, then brushless are the real winners because, in virtue of the most efficient interaction between magnetic fields, with the same power as asynchronous competitors, they have much smaller physical sizes; this, in forefront industrial machines, is almost as irremissible.
Last, but not for this reason negligible, DC motors that, even if energy-eaters, grant high performances in critical sectors like drive and lifting. (Alberto Pivari)