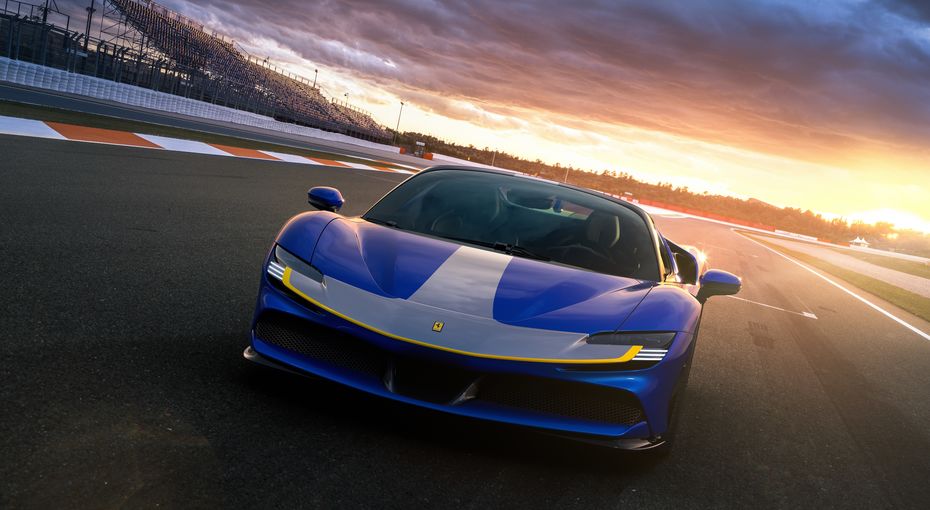 Extraordinarily fine. SF90 Spider, convertible version of the SF90 Road, it is not only the first Ferrari series plug-in hybrid spider, but it also represents the absolute reference in terms of drive performance, innovations and emotions compared to the range by Maranello Company and the production of the whole sports car sector.

It is a disruptive car, for those aspiring to the highest level of Ferrari technology and wishing to be excited by its performances without giving up versatility and the drive pleasure with open top assured by RHT (Retractable Hard Top), factory trademark of the spiders by Prancing Horse since 2011.

The hybrid plug-in system of SF90 Spider assures it top performances: the 780 HP turbo motor is in fact joined by three electric motors, one at the rear and two on the front axle, which raise the maximum available power to as many as 1000 HP.
However, the great refinement of this plant does not imply complications for the pilot because the sophisticated control logic autonomously supervises the energy flow management according to use conditions.

Therefore, the driver’s only task is setting up one of the use modalities of the power unit (eDrive, Hybrid, Performance and Qualify) that can be selected by the brand-new eManettino and let emotions free.

Like the SF90 Road, also the SF90 Spider is equipped with four-wheel drive on-demand, an absolute première for the sports cars by Maranello Company that allows the car to turn into the new benchmark for the standing start: 0-100 km/h in 2.5 s and 0-200 km/h in 7.0 s.

The adopted architecture has allowed engineers to enhance also the management logic of the dynamic car control, now called eSSC: the system constantly assesses the dynamic vehicle conditions and checks its driving stability and front electric motors, in order to manage independently the torque applied to the inner and outer wheel (Torque Vectoring), significantly improving traction out of corners and allowing the pilot to reach the limit in full simplicity and safety.